It’s convenient, but bad for the scalp. So bad it might lead to hair loss.

There’s a common pattern with socially constructed beauty norms. Society insists women do many ridiculous things to look good. Women, being people, clamber to find short-cuts to accomplish said things as easily as possible. The arms race continues until the norm goes away or a harder-to-imitate beauty trend emerges.You can see

this dynamic at work in a newish, miraculous, terrifying innovation called dry shampoo.The stuff is the best friend of the lazy-yet-vain. When sprayed onto hair, it soaks up oil, giving the impression of freshly washed and styled coif in seconds. Since its discovery dry shampoo afford the user an extra 15 minutes in bed while the rest of the world climbs groggily into their showers. One would simply skip the blow-drying and heat-styling in which those of the female persuasion often engage—another 10 or 15 golden snooze minutes. 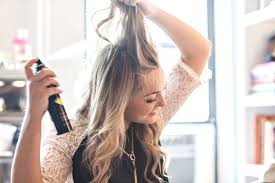 It is simple, you wake up and tip your head upside down, spray on the shampoo, shake your head a bit, flip it back over and grin at the reflection of your fluffy bouffant. You look and smell clean when in fact your hair is anything but. At first, the dry shampoo is just a stop-gap until the next day, when you would clean yourself with actual water.

Next, you begin recommending dry shampoo to busy and tired female friends, in the conspiratorial tone that Not-An-Actresses use in infomercials. “Feel my hair. FEEL IT,” you will demand. Then, the big reveal: “I haven’t showered since Tuesday.”

Gradually, though, you will began to notice something disturbing. The two sides of my hair looked like they were slowly drifting away from each other at the part. Granted, it can some item be hard for you to tell when your hair is initially thinning.

All of a sudden you begin to notice a few dozen extra strands that would defect from your head and onto your fingers each time you showered.

You will see a lot of headlines like, “Is Your Dry Shampoo Making You Go Bald?” You will also found a terrifying phone, posted on Facebook by a woman in Belfast, showing a bald spot she believes was caused by over-using dry shampoo. “Dry shampoo caused me to now have this bald patch on my head, (which I still have and it may or may not grow back, but nothing can be done),” she wrote, somehow summing up the fears of all of womankind in a single parenthetical. “Just wash your hair people!”

Of course, the problem with the wise woman’s counsel is that You’ve previously read or have been told about how showering and shampooing too often is also not good for your dreads. Damned if you shampoo, it seems, damned if you don’t.
To get to the bottom of this, there was an unscientific poll of 11 hair experts and dermatologists about how frequently, if ever, you are supposed to launder your hair, and with what.According to them, women have fallen prey to a mass delusion that dry shampoo is actually shampoo. It’s not, in that it doesn’t clean your hair. It soaks up excess oil, and in the process, it irritates your scalp. That can lead to hair loss, as can the clumping that dry shampoo and other hair sprays sometimes cause.“

[Dry shampoo] deposits substances to coat the follicle that can build up,” Sonia Batra, a dermatologist in Los Angeles, stated. “The resulting inflammation can weaken the follicles and increase shedding. These products can also cause hair follicles to stick together, so that a hair that would normally shed during brushing may take two or three strands along with it.” 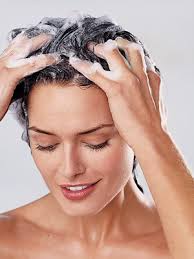 The good news is that only three of the respondents asserted definitively that yes, dry shampoo makes hair fall out. Sadly, the bar they set for its depilatory potential was pretty low. One hair stylist said all it would take is using it three days in a row, while a dermatologist advised against three days per week, consecutive or not. Dhaval G. Bhanusali, a dermatologist in New York, drew an even harder line, saying dry shampoo on more than two days per week would be excessive. Several people noted that, whatever they do, people should avoid dry shampoos that use talc, a substance found in baby powders that has been at the center of several cancer lawsuits..

Sigh, first canned soups, and now this? Must all time-savers be secretly harmful? The experts where then asked how often, should one regularly shampoo. Their consensus was every two days or so. Or even more often, if you, like yours truly, have very fine hair that starts to look like the unctuous coat of a baby sea lion about three hours after you step out of the shower.

“Cutting back on how frequently you shampoo won’t necessarily cure an oily scalp or cause your scalp to produce less oil. You either have an oily scalp or you don’t—just like your complexion,” said Rebecca Kazin, an assistant professor of dermatology at Johns Hopkins.