As I have mentioned, I do not have severe hair loss. I have experienced thinning hair since I am both a senior citizen , take some medications that can cause hair loss, struggle with diet and exercise. But I can control some of those causes. 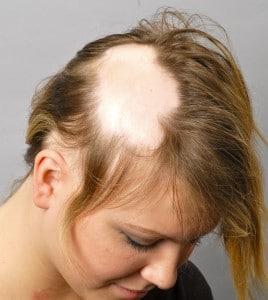 I have read about people with Alopecia and I have met one. The first time I ever heard of Alopecia was while I was reading a magazine published in the UK called “Heat”. A prominent television personality had lost all of her hair due to Alopecia and it was the absolute talk of the town. She finally realized that she could benefit others by sharing her story and she did so by agreeing to many interviews and speaking engagements.

That happened eight years ago and to this day she has not re-grown any of her own hair. I see pictures of her wearing wigs and/or scarves and hats but she is still totally bald. This is a beautiful woman with a huge presence on British television so I can only imagine how difficult this has been for her. She has had to make a major adjustment and has fought to keep her self-esteem.

My second encounter with someone with Alopecia came in the strangest of all places; a super market line waiting to check out. There was a middle-aged mother trying to corral her unruly two year old while trying to catch her head scarf as it slipped down off of her head revealing complete baldness. People stared...they made no secret or tried to hide their curiosity and I felt badly for her as she struggled to regain her composure with all eyes upon her. I, being a mom was more concerned with her unruly child than her baldness because that was something that I could relate too. But, I also noticed her condition and tried not to stare. 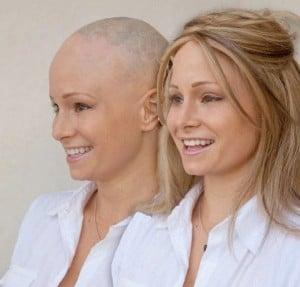 As I moved closer to her in the line she lost her grip on her little boy who was about to make his escape and she asked me to grab him for her before he got away. Of course I helped her, I would have expected no less if I had asked for help when my children were young and curious. As I got hold of the wiggly little boy she turned to thank me for my help and I noticed that she had tears in her eyes. I remember feeling very frustrated when my children misbehaved in public but I never cried about it...at least not where others could see. So I asked her if she was okay and she slowly shook her head and said, “Not really”.

What to do next? Should I further probe and get involved in her business or smile kindly and move on? The pain in her tear laden eyes told me that I needed to try to make her feel better...former nurses do that sort of thing whether we should or not (it comes with the territory).

I asked her if I could help her and she said, “No, no one can help me. I recently lost my hair and found out that I have a form of alopecia. I had no idea what that was until the doctor told me and my life changed forever. At first I struggled to go out in public and sent my husband on all of my errands and just sat in my house afraid that people would stare. As you can see, they DO.” “Wow”, I thought.....how awful for her.

I tried not to show my shock at hearing her story but my facial expression must have given me away because she smiled a little smile and said, “It’s really not so bad, the doctor said that as quickly as I lost my hair it could come back and I live for that day. I have hope. I also have some really pretty wigs that I bought and when we have a special occasion I wear one of them and my hair looks even better than it used to.”

I thought that she was very brave and as we said goodbye I realized how blessed I am for being relatively healthy. That could have been me...or anyone else for that matter. When I got home I looked up Alopecia on the Internet and was astounded to read about it and about how many people suffer from this disease in one form or another. I also read about some of the treatments and research involved with this condition. There is hope!

To this day I never forgot that woman and whenever I write something on here I remember her and the tears in her eyes. Most of all, I remember her hope.