Women put so much value on their hair, it can be heartbreaking — even more so than for men — when it starts to thin or fall out. Yet, despite hair loss affecting 21 million women in the United States, the issue is still seen as a male-focused problem. 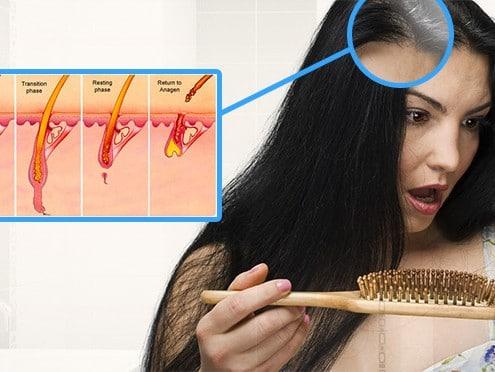 While hair loss might not mean the difference between life and death, it can certainly cause a lot of emotional and psychological distress. After all, waking up to a pillow full of hair, or pulling out clumps of it while brushing, isn’t normal. Yet, for many people, the reality of it comes all too sudden. Researchers say this can lead to a range of issues from anxiety to depression often brought on by the idea that losing hair is a process of disfigurement — a transformation toward ugliness. For some women, hair loss is so traumatizing that it causes them to avoid social interactions. Others, meanwhile, experience stronger psychological effects than they would from having breast cancer.

Seeing your hair fall out may be a shocking, tear-filled moment, but it doesn’t have to stop you from living your life. Knowing what it is, and what you can do to slow it down or prevent further thinning, is step one to getting through.

What is female pattern baldness?

Female androgenetic alopecia, also known as female pattern baldness, is the most common type of hair loss in women, affecting at least half of all women to some degree before age 50. Unlike men, who experience a set pattern of balding, women are more likely to experience hair thinning all over the head, with balding (if there is any) occurring along the medial hairline (the one that runs from back to front). Except for hair loss that comes with aging, thinning along the frontal hairline tends to be minimal.

Most women who develop androgenetic alopecia start to lose their hair gradually. It’s a hereditary condition whose main offender is dihydrotestosterone, or DHT, which is derived from testosterone when it interacts with an enzyme in the hair follicles.

According to the American Hair Loss Association (AHLA), this conversion of testosterone is a normal process in both men and women — women produce testosterone too, albeit at lower levels. Around the time a woman hits menopause, her estrogen levels begin to dip, causing an imbalance of hormones and the overproduction of DHT. This is, in part, how hair loss begins.

While there may not be any overnight remedies for hair loss, there are certain treatments that have been shown to work. (Note: It’s very unlikely any of the “revolutionary” hair products you see on social media or the TV work.)

“Some people think that taking vitamins like biotin will help reverse their hair loss, but what they don’t realize is that hair loss is genetic, and you can’t really change your genetics,” Dr. Robert Leonard, a hair restoration surgeon at Leonard Hair Transplant Associates in Rhode Island and Massachusetts said to Medical Daily.

On the other hand, Bordone says these supplements might help in cases where it’s unclear whether the hair loss is temporary or permanent. “If a woman has heavy periods, or is a strict vegan or vegetarian, it would be wise to be checked for low iron, since this can affect hair loss” she said. “Biotin is in many cereals and common foods so deficiency is unlikely in the general population, and supplementing with Biotin in safe amounts is generally harmless so if my patients are interested in trying this I tell them to give it a shot.”

For now, there are only two drug treatments approved by the Food and Drug Administration for treating hair loss. Propecia, a drug originally used to treat enlarged prostates, can also treat hair loss; however, this treatment is usually meant for men because it can increase the risk of birth defects in a male fetus. The other is Minoxidil, a topical liquid more commonly known as Rogaine, which helps men and women grow some hair back. If this treatment doesn’t work, there are always laser caps and combs, which stimulate hair follicles to produce hair growth, as well as hair transplants (though these cost upward of $12,000 per treatment).

Leonard Jr. says for more than half of patients, hair will begin to grow after about four months. However, to get the full effects of the treatment, “patients should try... for at least one year.” Patience is key. “Everything takes at least four months to show results. but I have patients who stop after a few weeks because they don’t think anything is happening,” he said. “I always tell them that it didn’t take two years for your hair to fall out for it to just reappear in a few weeks.”

While Leonard Jr. and Bordone believe a cure for hair loss will eventually be developed, they say the research is moving slow due to a lack of funding. “People would rather invest their money and grants into things like breast cancer research, so it’s hard to get funding for research on hair loss,” Bordone said.

Pharmaceutical companies have been among the few working on potential cures. Allergan, for example, which produces the popular wrinkle treatment Botox, is also behind the FDA-approved eyelash growth serum Latisse. In a 2013 study, researchers found slight success using different strength formulations of Latisse’s main ingredient, bimatoprost, on patients with androgenetic alopecia. In three experiments, roughly 25 to 40 percent of patients said the amount of hair on their head had “slightly increased” from baseline. Further research will be needed to fully vet the findings.

If and when a cure for baldness comes, it’ll drastically change the lives of scores of women, who will no longer have to feel ashamed of losing the hair they value so much. “These women would be able to finally go out and live their lives without feeling like someone is staring at their heads,” Leonard Jr. said.