Nearly 80 percent will experience some loss by age 60, but there are ways to minimize the damage 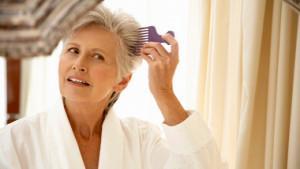 Baldness and its ramifications have been in the news quite a bit lately: Just this month, new research found that male pattern baldness is associated with a 30 to 40 percent increased risk for heart disease and, for African-American men, an apparent 69 percent increase in prostate cancer risk.

But women also experience hair loss, clinically known as alopecia. They make up 40 percent of hair loss sufferers, according to the American Hair Loss Association — and nearly 80 percent of all women will experience some thinning or loss by age 60. With those numbers in mind, what follows is a guide to what women need to know about hair loss in midlife and beyond.

It is normal for healthy women in midlife to lose as many as 50 to 100 hairs per day, but if you think your comb is pulling out more strands than usual or that your hair has thinned, one of a variety of health concerns could be disrupting that natural cycle.

“Our age, hormone changes and heredity all can lead to hair loss,” says dermatologist Marcy Street of Okemos, Mich. “These are things we can’t change.”

About 30 million women will experience hereditary hair loss, or female pattern baldness, at some point in their lives, according to the American Academy of Dermatologists. That depletion most typically occurs following the hormonal changes of menopause, specifically decreased levels of androgens.

Women (and men) can also suffer situational hair loss, brought on by stress, poor diet, smoking or a bad reaction to hair care products or treatments. “When our body undergoes stress — whether physiological, emotional or hormonal, it can manifest as hair loss,” Orit Markowitz, a dermatology professor at Mount Sinai School of Medicine, told Next Avenue. Nutritional stress, such as crash dieting, can lead to hair loss as well, she added.

Styling and chemical treatments are among the major culprits, Street says. Coloring treatments employed to hide gray hair, including bleaching, can harm some scalps. And women who style their hair in tight ponytails or braids can suffer traction alopecia, which causes thinning and loss around the hairline and in spots where the hair is pulled too tight, stressing follicles. “But if you catch it early and move to looser hairstyles and less pulling, the damage does not have to be permanent,” Street says.

Straightening can also cause temporary or permanent alopecia. Improper use of chemical relaxers, too much hot combing and using glue to add extensions to the scalp can bring about traumatic hair loss as well.

Underlying medical causes of alopecia in women are more difficult for dermatologists to diagnose. “When patients come to us, we do a thorough medical workup, including blood tests,” Street says, “and in more severe cases we’ll even do scalp biopsies to determine the cause and the best possible treatments.”

An overactive or underactive thyroid can cause hair loss, as can vitamin B deficiency and the side effects of medications, including beta blockers prescribed for high blood pressure, glaucoma or migraines.

The earlier you catch a potential problem, the better your chances of getting treatment to at least stall its progress. Pay attention to how much hair you’re losing and from which areas of the scalp it is falling out. If you see breakage and thin spots around the hairline, see your dermatologist to determine what the issue is.

How We Treat Hair Loss Now

Sometimes, the treatment is simply a matter of stopping a damaging styling practice or changing a prescription medication. “In cases where loss is more advanced, we sometimes use a combination approach,” Street says. “If there is scarring on the scalp that is inhibiting new growth, we will often use cortisone injections to help break down that scarred tissue. We will also recommend using topical minoxidil, an over-the-counter, Food and Drug Administration-approved product that has been shown to increase hair growth.”

There are some downsides to minoxidil. It is more reliably effective in people under 40, according to the National Institutes of Health. It must also be applied twice a day, even after hair has grown back, or gains will most likely be lost.

Even with combination treatments, hair regrowth does not happen overnight, especially when the problem is long term. “Patience is a virtue when trying to reverse hair loss,” Street says. “When we start on a course of therapy, I tell my patients that it will take between three and six months to see any change, if it is working at all.”

In severe cases medications won’t do the job. Some women explore hair restoration surgery and transplantation, in which hairs are removed from more dense patches of the scalp and transplanted in thinner or bald spots. Transplantation is often successful, but it is expensive, typically costing $10,000 or more in out-of-pocket charges — and improvements may not be permanent. The alternative to a surgical solution is called a “hair system”. There have been many advancement made in the hair replacement industry. Most of the solutions are nondeductible and feel like a second skin.